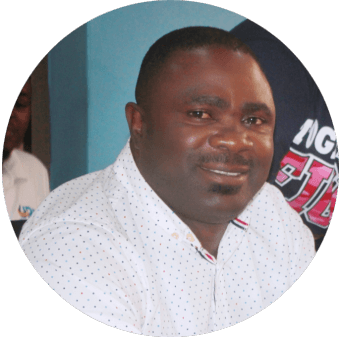 A Born Again Christian born in 1971, he hails from Kateete, Kayunga District. In 1988, he started his film translation business with Kampala Happy Boys Videos that was established by the Late Nelson Ocheng. They specialized in mobile cinema/show thus a determining factor for his strong routes and experience in the field.

In 1998, he established his own “Kajansi Boys Videos” commonly knows as KB Videos that was later in 2001 incorporated as VJ Jingo/Kajansi Boys Videos. He is also the co-founder of the Union of Video Owners Association. In 2019 following the need to revitalize film business in Uganda, he was fundamental in mobilizing film distributors to establish film distribution structures thus the founding of the Distributors Guild (AAVDL).

He is a co-founder of the VJs & Publishers Guild (ACIP), the PRO of the same organization and a Member of the Pearlwood Board of Directors.

In addition to film translation, he has ventured into film acting and with great aspiration in producing. He has featured in movies such as: